As a child growing up in Halle (Saale), East Germany, it was clear to me that I wouldn’t stand a chance to study in the German Democratic Republic (GDR) without being a member of the FDJ (a communist youth organization) and refusing military education. So I looked for alternatives and planned to start studying bookbinding in Leipzig in the summer of 1990. But then everything changed in 1989. After big demonstrations, the wall came down, the dictatorship was over and the two parts of Germany were soon reunited. This opened up new opportunities for me: I could continue my formal education in order to study at university, I travelled through South America and Tibet, and a new world opened up for me. After dealing with a difficult illness, I dared a new start in London, applied at Roehampton Institute for a Bachelor of Arts in Calligraphy and Bookbinding and I was lucky enough to be accepted even with low English language skills. In these three years I gained self-confidence and could shake off the confining GDR experiences. After completing my degree, I found out that my friends Anne Wilhelm and Elske Rosenfeld needed to find something to do. At the time, you could apply for financial support for new start-up businesses in the former East German federal states. That’s what we did in Dresden. First, we drank a lot of coffee, smoked a lot of cigarettes, and developed our plan for a joint project. With the money, we were able to put our plans into action: Elske ran the gallery, Anne was in charge of a project management agency, and I set up my studio where I would also offer courses in calligraphy and bookbinding. My studio got the name Blue Child. The Gallery was called 3st & Töchter. 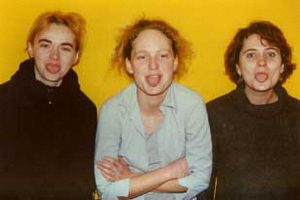 We moved into a shop between the Dresden Neustadt streets of Alaunstraße and Görlitzerstraße in a newly opened passageway called Kunsthofpassage. The Kunsthofpassage (Art Passage) is several old backyards connected together and renovated and artistically designed by different artists, sculptors and designers. We kept our shop in the Hof der Metamorphosen (Courtyard of Metamorphosis) for the first year, after that, we moved to the Hof des Lichts (Courtyard of Light) with a newer concept. Elske left and started doing something else. Anne ran the ground floor, which was turned into a paper shop with calligraphy and bookbinding supplies. Upstairs became a gallery space, where I arranged exhibitions with artists from Germany and abroad. I also began teaching private calligraphy and bookbinding courses there. 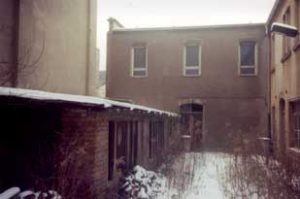 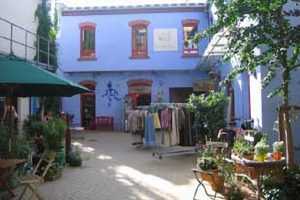 After another five years Anne said goodbye to sail around the world and Susanne Schottmann took over the shop. I turned the gallery above the shop into a my bookbinding workshop. I ran the workshop upstairs from 2006 to 2018 and used it for courses with small groups. But after sustaining water damage we decided to close the shop down and I moved my bookbinding studio into my home. I rent various other facilities for courses. More information about the courses here.